Like the iPhone XS, the iPhone XR features an edge-to-edge display with slim bezels and no Home button, instead adopting a notch and the True Depth camera system for Face ID. Rather than using an OLED display, the iPhone XR is equipped with an LCD that has slightly thicker bezels than the XS due to the limitations of the LCD.

At the front of the XR, there’s a notch that houses the True Depth camera system, speaker, and ambient light sensor, but other than that, the iPhone XR is all display. 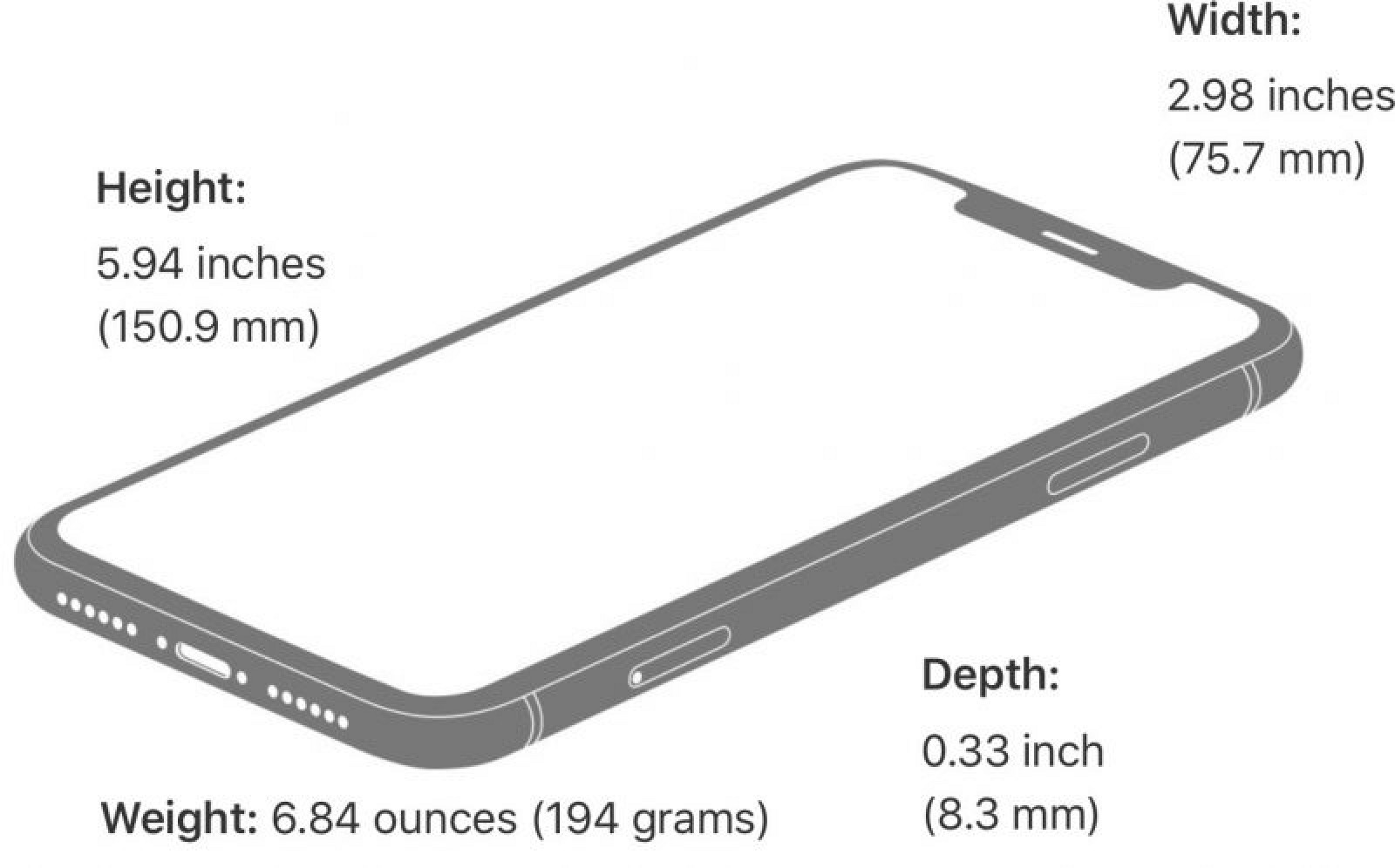 Apple has created iPhone XR in six colors, marking the first time since the 2013 iPhone 5c that iPhones were made available in colors other than silver, space gray, gold, and red. 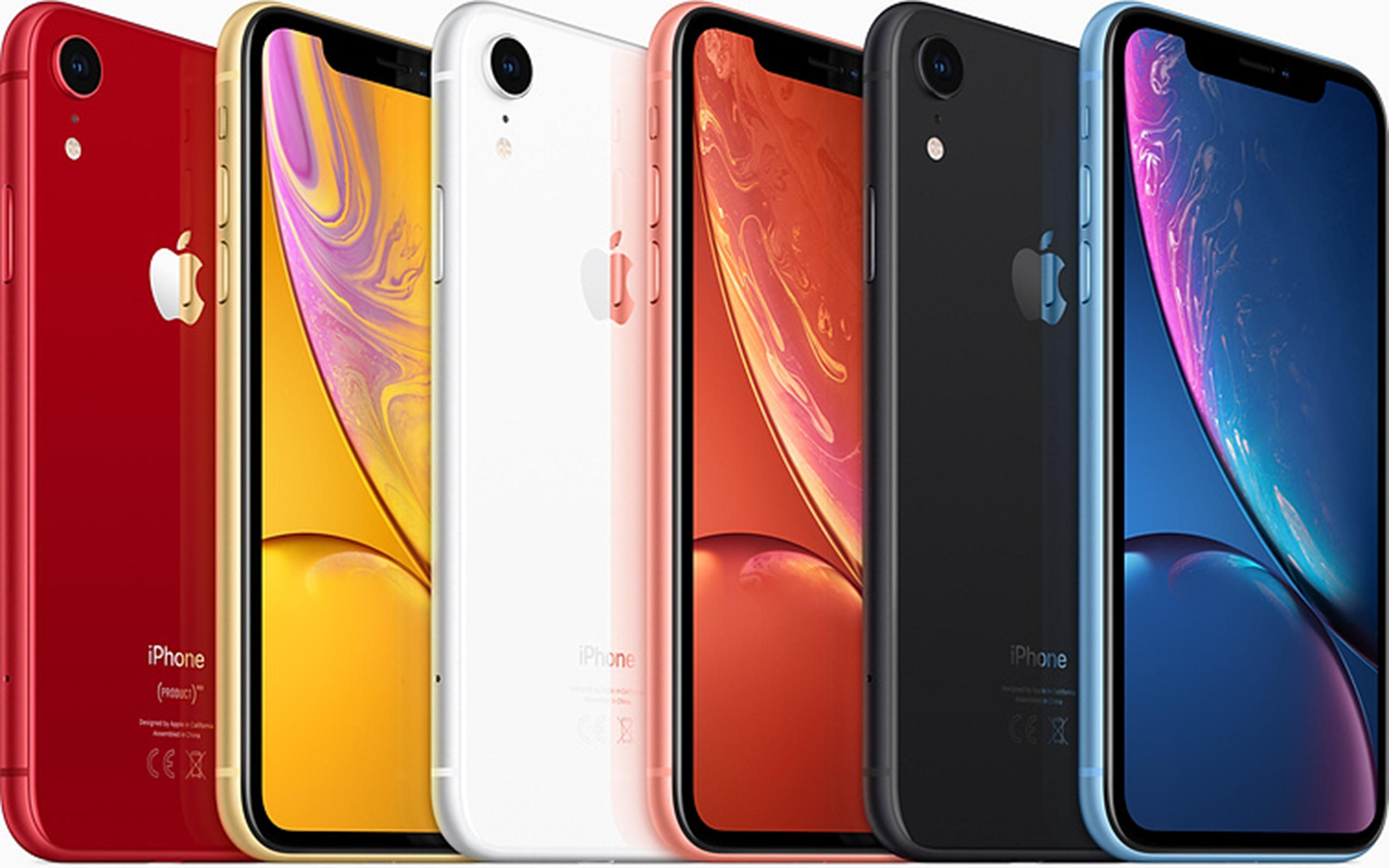 The iPhone XR is IP67 water and dust resistant, which means that it is impervious to dust and can withstand immersion in water up to one meter (3.3 feet) deep for 30 minutes in laboratory conditions.

Though the iPhone XR can withstand splashes, rain, and brief accidental water exposure, intentional water exposure should be avoided. Apple warns that water and dust resistance are not permanent conditions and could decrease as a result of normal wear. 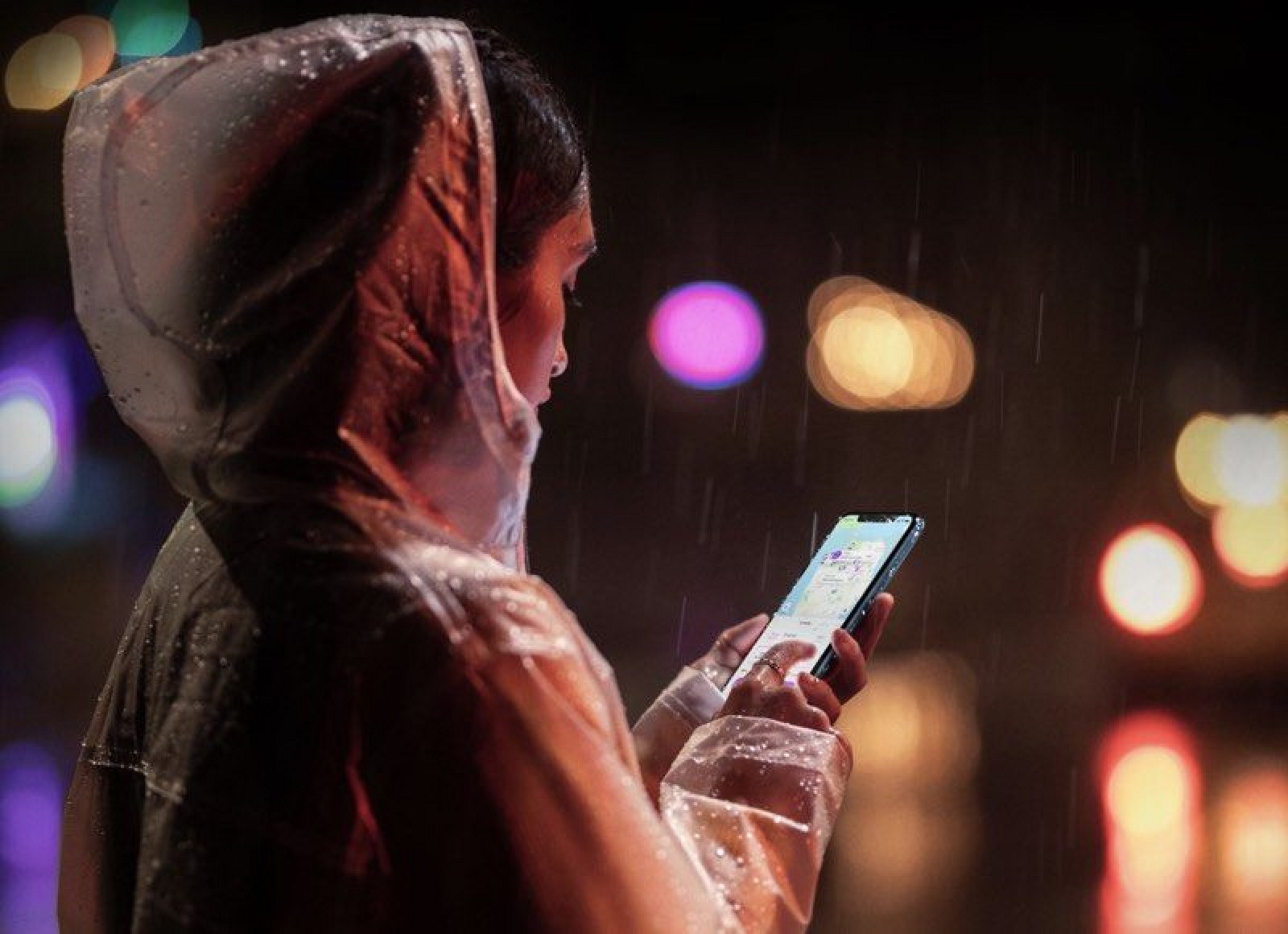 iPhone XR is equipped with the most advanced LCD in a smartphone, which features several technological advancements to make it larger than ever.

Apple says new engineering techniques were created for pixel antialiasing and pixel masking to extend the display to the edges of the device. Apple also used LEDs that fit into a smaller space than ever before along with a new backlight design to make the display larger and able to reach to the corners of the iPhone.

Given the advanced LCD technology in use, Apple has given the display a new Apple-style name: Liquid Retina.

The iPhone XR’s display measures in at 6.1 inches and it has a resolution of 1792 x 828 with 326 pixels per inch and 1.4 million total pixels, meaning it is inferior to the OLED display in the iPhone XS models but on par with past iPhones that have used LCDs. 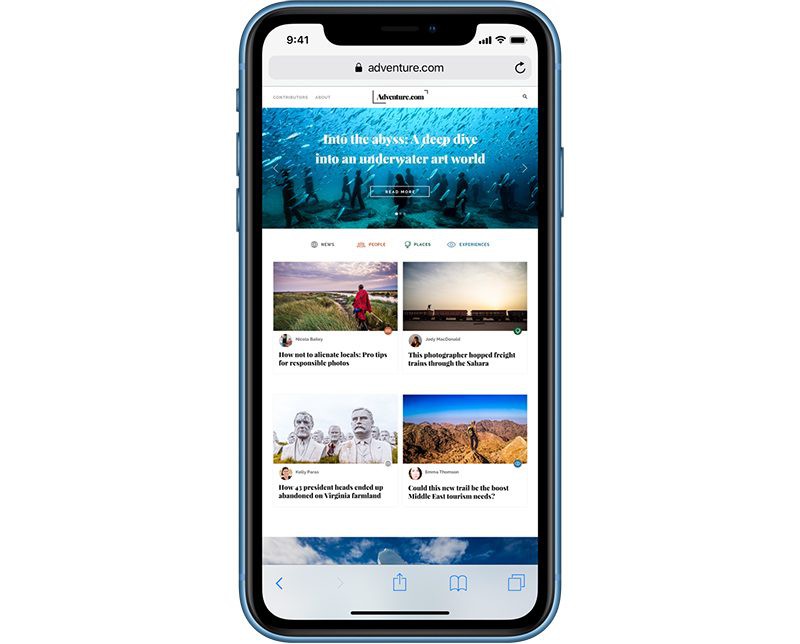 Apple eliminated the 3D Touch feature in the iPhone XR and instead replaced it with a new Haptic Touch option, which the company says is similar to the haptic trackpad in the MacBook Pro.

The iPhone XR is equipped with a new 7-nanometer A12 Bionic chip that’s faster and more efficient than the A11 in the previous-generation iPhone X.

There are two high-performance cores in the A12 that are up to 15 percent faster than the A11 Bionic and four efficiency cores that use up to 50 percent less power. The A12, combined with a bigger battery, enables much longer battery life for the iPhone XR.

As with the A11, the A12 can harness all six of its cores at once when a boost in power is needed, and a new performance controller dynamically divides work across the cores for the best performance and battery life.

Apple’s A12 Bionic includes a 4-core GPU that offers up to 50 percent faster graphics performance than the A11 chip.

The A11 Bionic introduced the first Neural Engine, and the A12-chip has a next-generation 8-core version that uses real-time machine learning to power features across the operating system, improving photo taking, gaming, augmented reality, and more.

According to Apple, the Neural Engine is able to perform five trillion operations per second, allowing more to be done in real time. It’s what powers the machine learning features in the iPhone XR, like photo search, Face ID, and augmented reality experiences. 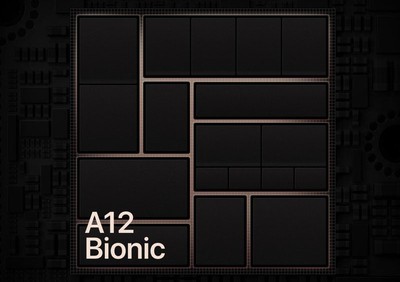 For the first time, Apple has also opened up the Neural Engine to the Core ML platform, which means developers can take advantage of the real-time machine learning features in their apps. With the A12 Bionic, Core ML runs up to nine times faster than on the A11 Bionic.

iPhone XR includes 3 GB RAM, 1 GB less than iPhone XS and XS Max and the same amount of RAM that was in the iPhone X. iPhone XR is available in 64 and 128 GB capacities.

Face ID, introduced in 2017 with the iPhone X, is the biometric authentication system used in the iPhone XR, which features a notch housing the TrueDepth camera system that enables Face ID. Face ID is used across the iOS operating system for tasks like unlocking your iPhone, allowing access to third-party passcode-protected apps, confirming purchases in iTunes and the App Store, and authenticating Apple Pay payments.

Face ID works through a set of sensors and cameras built into the front of the iPhone XR, called the True Depth Camera system. To create a facial scan, a Dot Projector projects more than 30,000 invisible infrared dots onto your face, which are then read by an infrared camera. 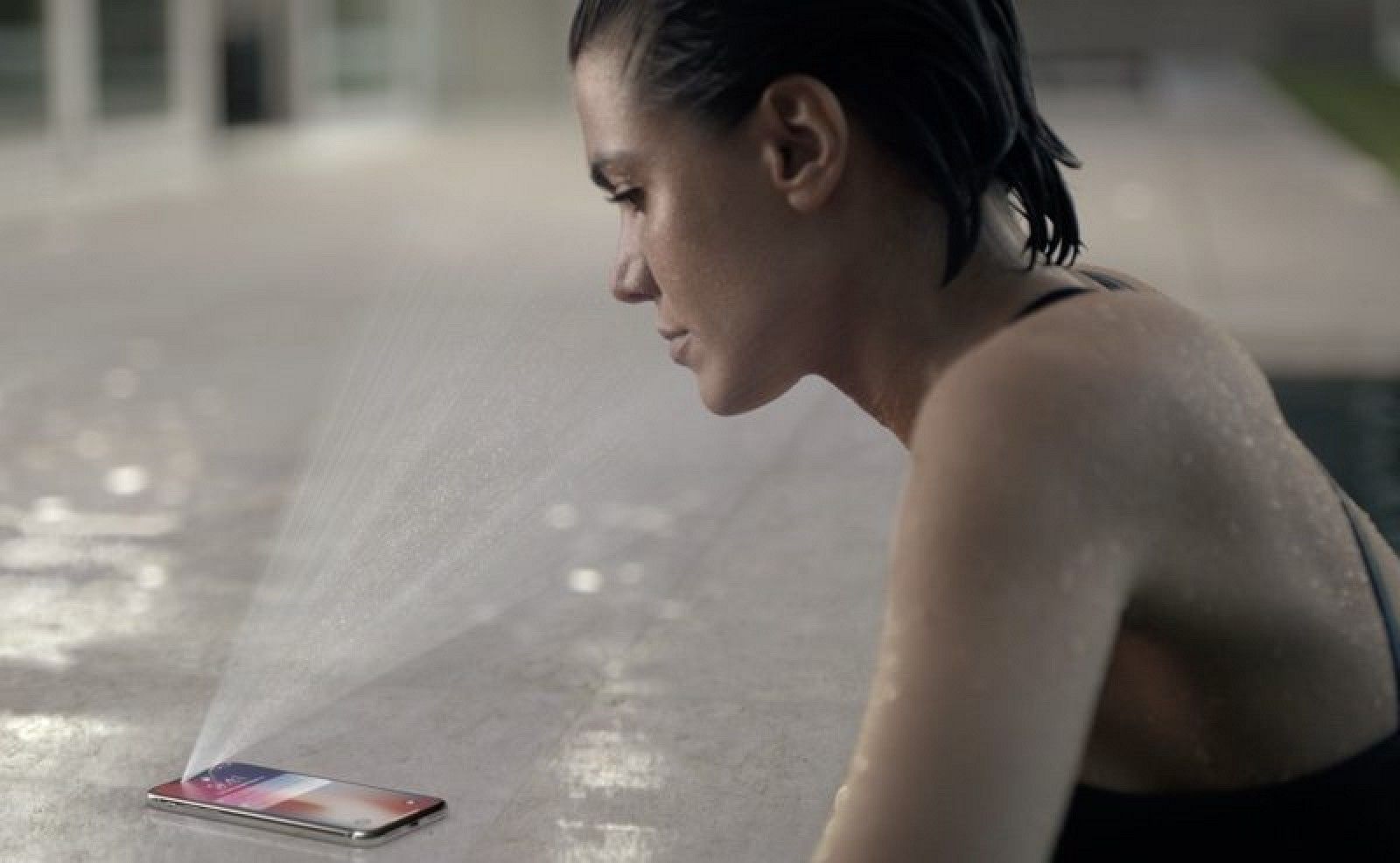 This depth map of your face is then relayed to the A12 Bionic processor where it is transformed into a mathematical model that the iPhone uses to make sure it’s you attempting to access your iPhone.

Face ID uses infrared, so it works in low light and in the dark, with a built-in Flood Illuminator making sure there’s always adequate light to take a facial scan. Face ID works with hats, beards, glasses, sunglasses, scarves, makeup and all other accessories and items that might partially obscure a face, but it does need to see your eyes, nose, and mouth to work.

The A12 Bionic chip with built-in Neural Engine means that Face ID can adjust to minor facial changes over time, so if you grow your hair longer or grow a beard, Face ID w adjusts and continue to unlock your iPhone. In iOS 12, there is an option to add an alternate appearance if your face changes drastically during the day due to sunglasses, scarves, or other accessories.

Face ID uses a detailed 3D facial scan that’s unable to be fooled by a photo, mask, or other facial imitation. An “Attention Aware” security feature allows Face ID to unlock your device only when you look in the direction of the iPhone XR with your eyes open, so it does not work when your eyes are closed, when you’re sleeping, when you’re unconscious, or when you’re looking away from your phone.

Attention aware is optional and there is an accessibility feature to turn it off for those who are unable to focus on the iPhone’s screen, but most people will want to leave it turned on for the added layer of security.

With the attention aware feature, the iPhone XR knows when you’re looking at it. Face ID displays notifications and messages on the Lock screen when you look at the iPhone XR, it keeps the screen lit, and it automatically lowers the volume of an alarm or ringer when it knows your attention is on the iPhone XR’s display. 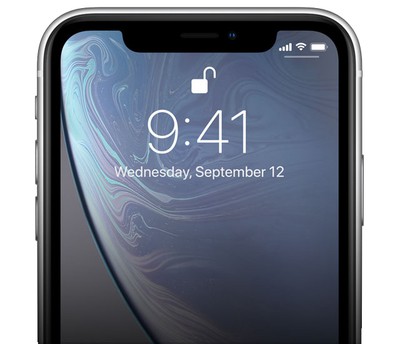 If a thief demands your iPhone, Face ID can be disabled quickly and discretely by pressing on the side button and the volume button at the same time. Do this before handing your phone over, and a thief won’t be able to scan your face. Face ID also turns off after two failed facial recognition attempts and a passcode needs to be entered for it to be turned back on.

Face ID data is encrypted and stored in the Secure Enclave on the iPhone XR. Apple can’t access your Face ID data, nor can anyone who has your phone. Authentication happens entirely on your device, with no Face ID data ever stored in the cloud or uploaded to Apple. Third-party developers do not have access to the facial map that Face ID uses to unlock a device, but the TrueDepth camera can be used to scan a user’s face for the purpose of creating more realistic augmented reality apps.

With Face ID, there’s a 1 in 1,000,000 chance that someone else’s face can fool Face ID, but the error rate increases to 1 in 1 in 500,000 with an alternate appearance registered in iOS 12. Face ID has been fooled by identical twins, children, and a carefully crafted mask, but it’s still secure enough that the average person does not need to worry about their iPhone being unlocked by someone else.

The TrueDepth Camera, in addition to powering Face ID with the infrared additions, is also a standard 7-megapixel front-facing camera that can be used for selfies.

The front-facing camera in the iPhone XR supports several new features, including Smart HDR for portraits that capture more detail in shadows and highlights and a new Depth Control feature that lets you adjust the amount of blur in a front-facing Portrait Mode image after it’s captured, or, as of iOS 12.1, when composing an image in real-time.

As with the iPhone X, wide color and Portrait Lighting features are available so you can adjust the lighting in your photos. There is, however, improved bokeh for better DSLR-style blurring in your images.

The True Depth camera can be used to capture 1080p HD video at 30 or 60 frames per second.

iPhone XR uses a single-lens camera system, but it is the most advanced single-lens camera Apple has designed, combining the latest hardware with some impressive software advancements to enable features that were not previously possible.

The iPhone XR is using the same f/1.8 12-megapixel wide-angle camera that’s in the iPhone XS and XS Max, and that camera, compared to the camera in the previous-generation iPhone X, features a 32 percent larger sensor with bigger pixels to allow for clearer, crisper photos even in conditions where lighting is poor. 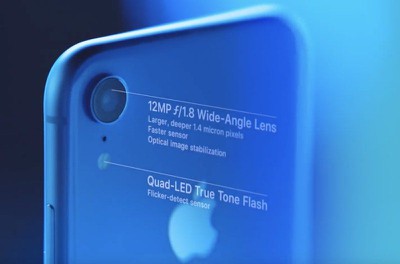 It also features twice as many focus pixels, includes optical image stabilization for photos and videos, offers wide color, and it features the same improved quad-LED True Tone flash with slow sync. The lens of the wide-angle camera is equivalent to 26 mm, which means it offers a slightly wider field of view than the camera in the iPhone X.

Machine learning techniques powered by the A12 Bionic allow the iPhone XR to recognize people, map subjects, and add depth, all of which allow for a Portrait Mode feature for the rear camera that does not require two lenses. 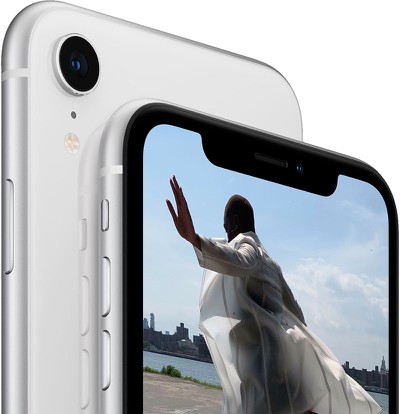 Portrait Mode is enabled through a software feature that creates a depth segmentation map using the camera’s focus pixels and neural net software to separate the subject of a photo from the background.

Portrait Lighting is also enabled through this technique, but a limited number of effects are available. Users can choose Natural, Studio, or Contour lighting options, but Stage Light and Stage Light Mono effects included on other iPhone models with dual cameras are not available on iPhone XR.

In addition to Portrait Mode, iPhone XR features advanced bokeh for better background blurring, Depth Control for adjusting the field of view after an image has been captured, and Smart HDR to bring out more detail in the highlights and shadows of images especially in low-light situations.

iPhone XR is fast-charge capable, which means it can be charged to 50 percent battery life in just 30 minutes. Fast charging requires a USB-C power adapter that offers at least 18 watts, which includes 29/30W adapters from Apple. 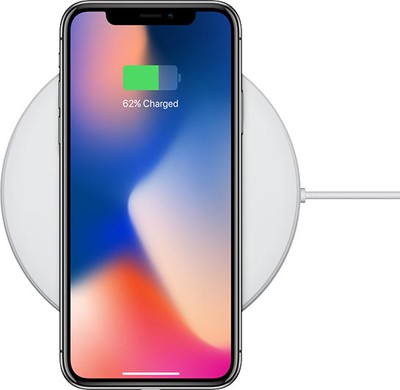 According to Apple, iPhone the iPhone XR charges “even faster” than the iPhone X, and there is a copper coil inside that facilitates slightly faster charging because it doesn’t heat up quite as much.

iPhone XR supports LTE Advanced for data transfer speeds up to 450Mb/s. It works with more than 20 LTE bands, with Apple using a single model for all cellular networks.

802.11ac Wi-Fi with 2×2 MIMO is supported, with support for connection speeds that can reach a theoretical maximum of 866Mb/s.

Support for GPS, GLONASS, Galileo, and QZSS location services is included in the iPhone XR.