The top bezel features a cutout for the front-facing camera, speaker, and accompanying sensors, and at the bottom of the device, there’s a Touch ID Home button covered in sapphire crystal. The iPhone SE has an all-glass body that uses a seven-layer ink process to add color to the glass, resulting in a rich depth of color. The glass display and the glass body are held together by an aluminum band that matches the color of each iPhone for a seamless look, and there are small antenna lines. 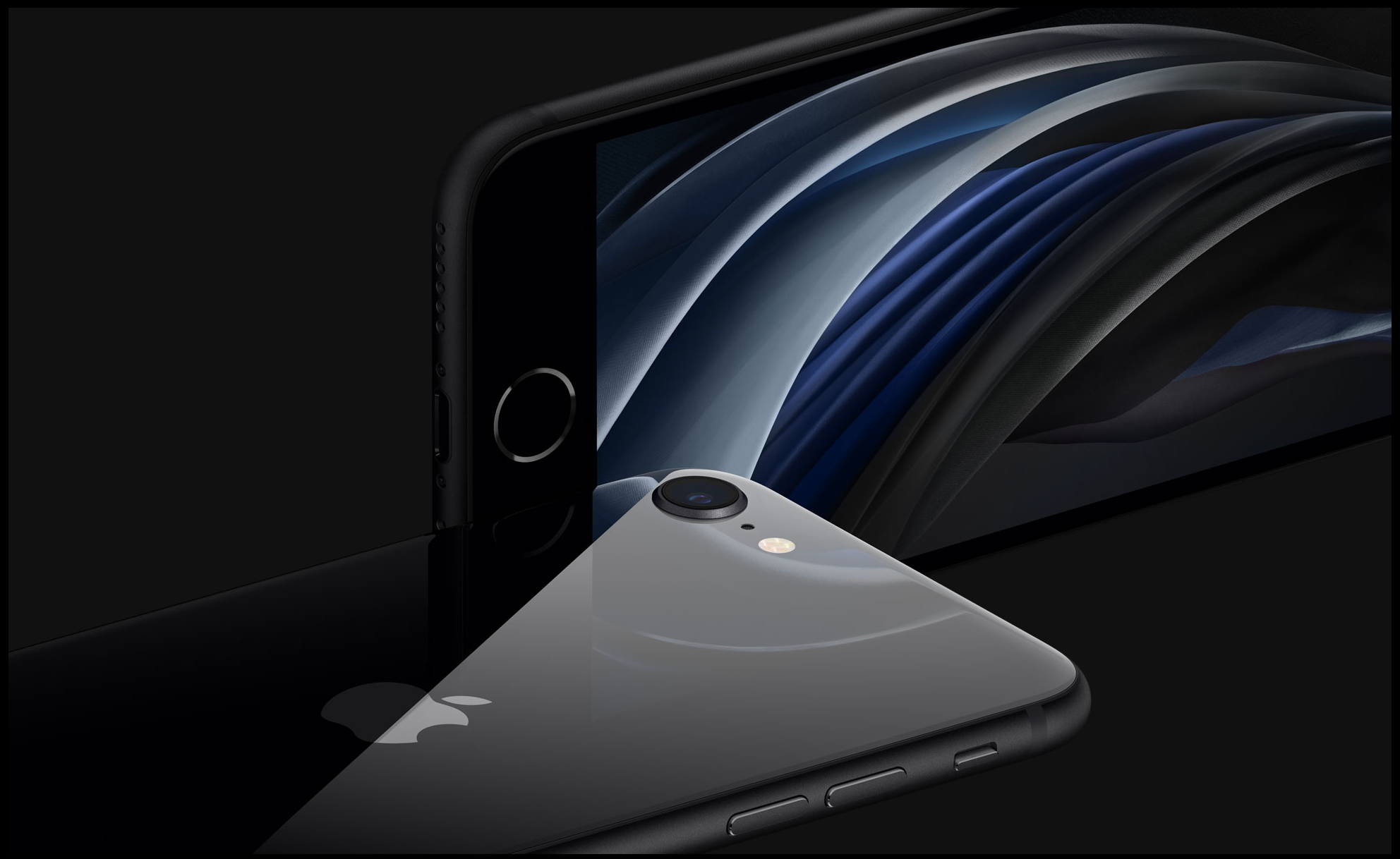 he back of the iPhone SE houses a single-lens rear camera, a microphone, and an LED flash.

On the left side of the iPhone SE, there’s a mute switch and volume buttons, while the right side features the sleep/wake button. The bottom houses a Lightning port and speaker holes, and like prior iPhones, there is no headphone jack so Bluetooth or Lightning headphones are required.

The iPhone SE is available in white, space gray and a (PRODUCT)RED version that features a bright red glass-backed shell. All three colors feature black front panels, including the white, which in previous light-colored iPhones was white. 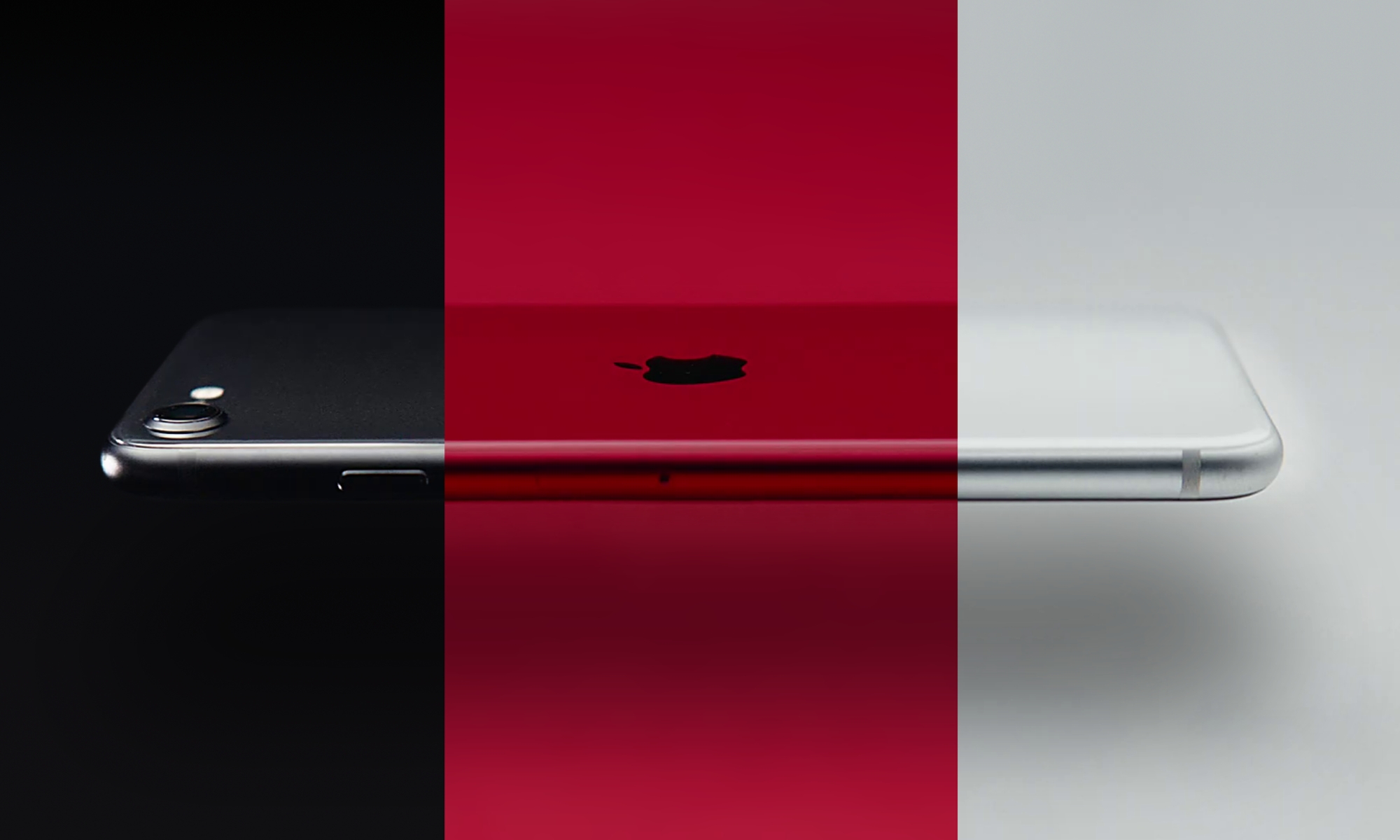 The iPhone SE features an IP67 dust and water resistance rating, which means it is entirely dust proof and able to withstand one meter of water (3.3 feet) for up to 30 minutes.

The iPhone SE holds up to splashes, rain, and brief accidental water exposure, but intentional water exposure should continue to be avoided. Apple warns that water and dust resistance are not permanent conditions and could decrease as a result of normal wear, plus Apple’s warranty does not cover any kind of water damage.

Apple’s flagship iPhones feature an all-glass design with Face ID, but to keep costs low, the iPhone SE continues to offer a Home button with a Touch ID fingerprint sensor.

The Touch ID Home button is covered with a durable sapphire crystal that protects the Touch ID sensor and a steel ring that detects a user’s fingerprint. Touch ID is used for unlocking the iPhone, filling in passwords with iCloud Keychain, confirming App Store purchases, opening passcode-protected apps, and confirming Apple Pay transactions. 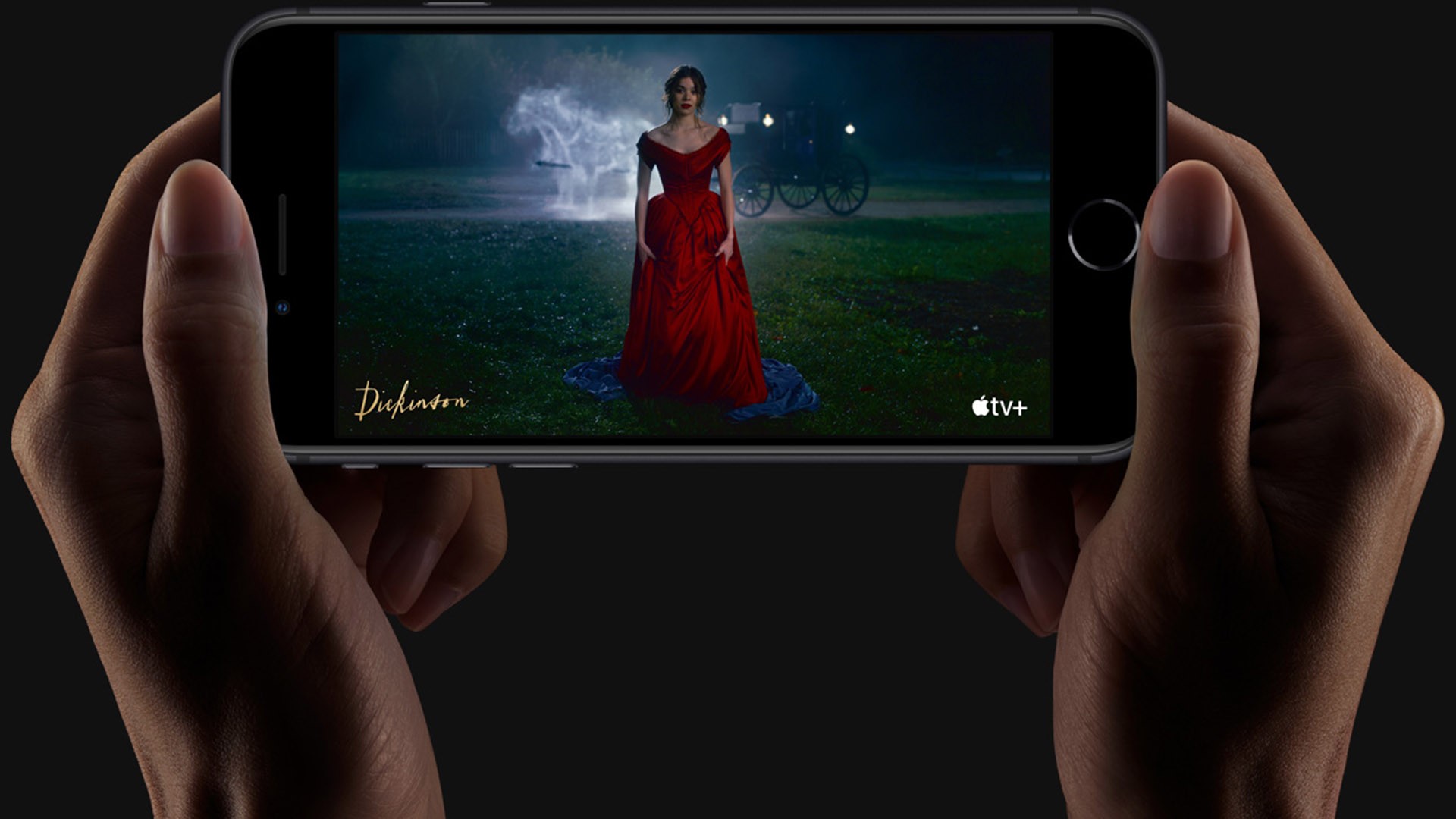 True Tone takes advantage of the ambient light sensor to detect the lighting in a room, adjusting the color temperature and intensity to match the light for a more natural, paper-like viewing experience that cuts down on eye strain.

Haptic Touch works similarly to 3D Touch and offers a lot of the same functionality, but it is not pressure-sensitive and does not support multiple functions for each press. It is instead better described as a long press or a press and hold gesture with haptic feedback.

Haptic Touch can be used throughout the operating system much like 3D Touch and for many of the same tasks, such as accessing Quick Actions on the Home screen, previewing links in Safari, activating the flash on the Lock screen, accessing extra features in Control Center, and more.

The iPhone SE is equipped with the same A13 Bionic chip that’s included in the iPhone 11, 11 Pro, and 11 Pro Max, and which was the fastest chip ever in a smartphone when it was first introduced in 2019. The A13 chip is much faster than the A11 that was in the iPhone 8, as well as more power-efficient, which improves battery life. There’s an 8-core Neural Engine in the A13 chip, which provides faster than ever real-time photo and video analysis. A pair of Machine Learning Accelerators allow the CPU to run up to six times faster, delivering more than 1 trillion operations per second.

The Neural Engine powers the camera system, Face ID, augmented reality apps, and more, plus there’s a new Machine Learning Controller to balance performance and efficiency. According to Apple, the A13 Bionic paired with iOS 13 enables new apps that make use of machine learning and Core ML.

The iPhone SE is available in 256GB storage option.

The 12-megapixel wide-angle camera features an f/1.8 aperture with optical image stabilization, wide color capture, and next-generation Smart HDR for improved highlights and shadow details. Apple says that it is the best single-camera system ever in an iPhone.

Portrait Mode allows for artful blurring of the background in an image when taking a portrait photo of a person, pet, or object, while Portrait Lighting allows six studio-quality lighting effects to be added to images. Depth Control allows the amount of blur in an image captured in Portrait Mode to be tuned for the best possible blend of blurring and detail.

The iPhone SE shoots 4K video at up to 60 frames per second, with 24 and 30 frames also available options alongside 1080 and 720p shooting modes.

Extended dynamic range support is available for video up to 30 frames per second, and optical image stabilization is available.

QuickTake video, a feature first introduced in Apple’s 2019 flagship iPhones is included, allowing users to capture quick videos by holding down on the camera button when in photo mode. Existing modes like slo-mo (1080p at 120 or 240 fps) and time-lapse are also available on the iPhone SE.

The 7-megapixel front-facing camera features an f/2.2 aperture with Portrait mode and Depth Control support despite the lack of a TrueDepth camera system. To enable this feature, Apple uses machine learning and monocular depth estimation.

The front-facing camera supports QuickTake, and it is the first iPhone front-facing camera to offer the feature. 1080p HD video can be recorded at 30 frames per second, and other features include Retina Flash, auto image stabilization, Burst Mode, auto HDR, and wide color capture.

The 2020 iPhone SE supports fast charging, which means it can be charged to 50 percent battery life in just 30 minutes. Fast charging requires a USB-C power adapter that offers at least 18 watts, which includes 29/30W adapters from Apple (priced at $49).

Support for GPS, GLONASS, Galileo, and QZSS location services is included in the iPhone SE.

NFC with reader mode is included, and there’s a background tag feature that allows the iPhone models to scan NFC tags without the need to open an app first. The iPhone SE also supports Express Cards with power reserve, which means it can be used in lieu of a transit card for public transit and continues to function even if the battery is dead. 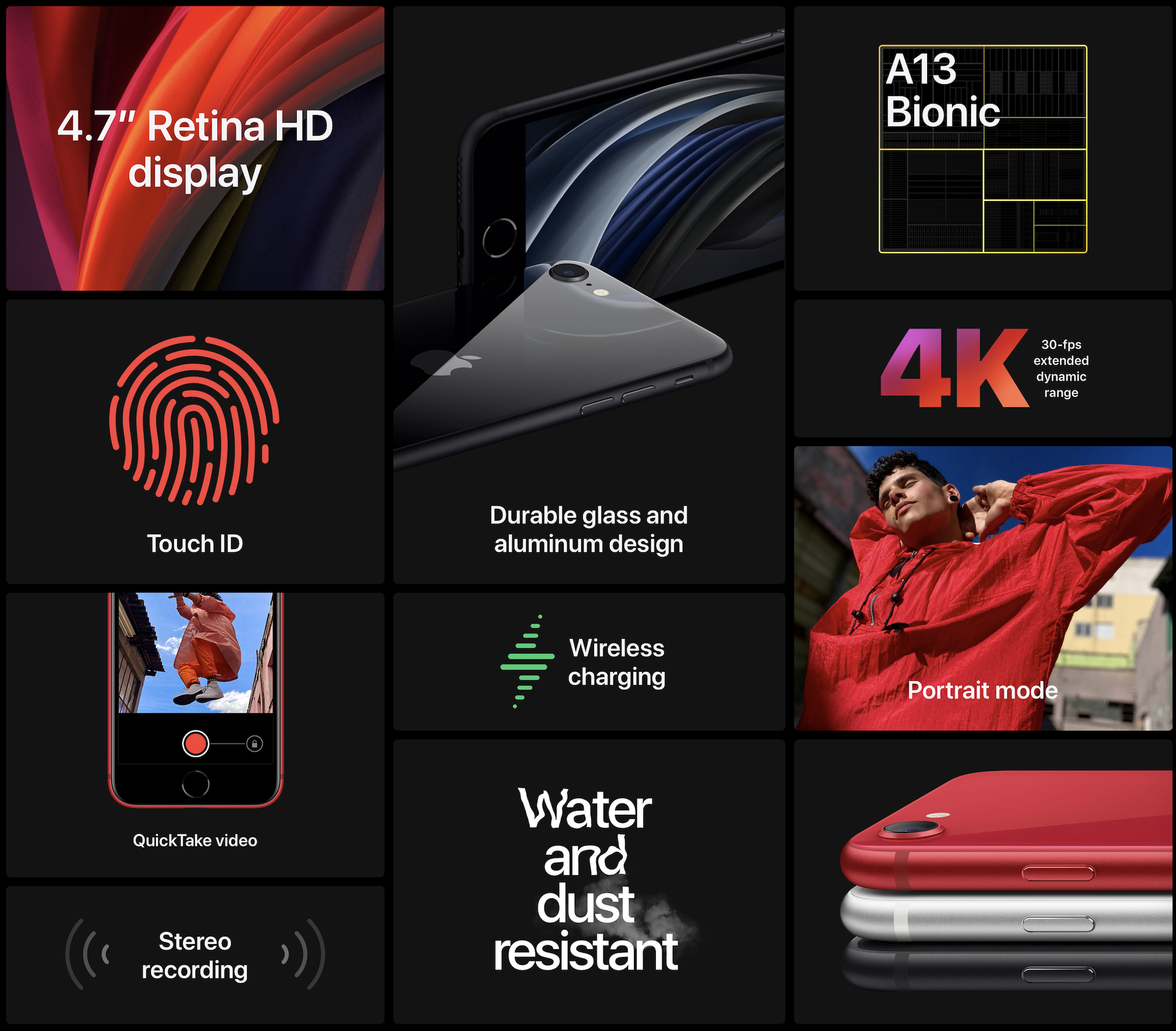